Liberty-Chesnee-Fingerville Water District, Spartanburg Water System and the South Carolina Department of Health & Environmental Control routinely monitors for 81 contaminants in your drinking water according to federal and state laws.

The tables below show the results of monitoring for contaminants which have been detected during the period of January 1st to December 31st, 2019 by the Spartanburg Water System.

*Only flouride results from samples taken by DHEC are given in the table. Average flouride level detected by SWS's certified laboratory during 2019 was 0.64 ppm for RB Simms.


UCMR4 - Unregulated contaminants are those that don't yet have a drinking water standard set by USEPA. The purpose of monitoring for these contaminants is to help USEPA decide whether the contaminants should have a standard.

What do all those symbols mean?


On August 6, 1998, the Environmental Protection Agency promulgated the Consumer Confidence Report regulation. This rule requires public water systems to publish an annual report for distribution to their customers and other water consumers which gives detailed information about water sources, water treatment, water quality and regulatory compliance. The sixteenth of these annual reports, covering the calendar year 2019, must be prepared and distributed by July 1, 2020. 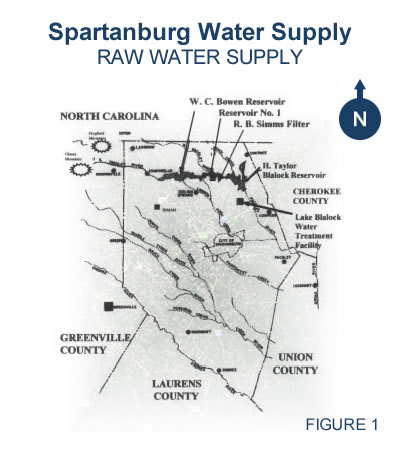 Lake Bowen is a man-made lake formed by the waters of the South Pacolet River and its tributaries. Water flows from Lake Bowen into Municipal Reservoir #1, another man-made lake. The entire watershed for these lakes lies within the state of South Carolina, in Spartanburg and eastern Greenville Counties. Water from these lakes is treated at the R. B. Simms Water Treatment Plant. Lake Blalock is also a man-made lake formed by the combining of surplus water from the Bowen/Reservoir #1 system with the North Pacolet River and its tributaries. Part of the Blalock watershed is in South Carolina and part is in North Carolina. Water from Lake Blalock is treated at the Miles W. Whitlock Water Treatment Facility.

The South Carolina Department of Health and Environmental Control (SCDHEC) is required by the Safe Drinking Water Act Amendments of 1996 to perform a delineation and assessment of each watershed in South Carolina which is used as a drinking water source. Additional information about SCDHEC's Source Water Assessment Program and the specific Assessments may be found through the following website: www.scdhec.gov


The sources of drinking water (both tap water and bottled water) include rivers, lakes, streams, ponds, reservoirs, springs, and wells. As water travels over the surface of the land or through the ground, it dissolves naturally-occurring minerals and, in some cases, radioactive material, and can pickup substances resulting from the presence of animals or from human activity.

Contaminants that may be present in source water include:

Some people may be more vulnerable to contaminants in drinking water than the general population. Immuno-compromised persons such as persons with cancer undergoing chemotherapy, persons who have undergone organ transplants, people with HIV/Aids or other immune system disorders, some elderly, and infants can be particularly at risk from infections. These people should seek advice about drinking water from their health care providers. EPA/CDC guidelines on appropriate means to lessen the risk of infection by cryptosporidium and other microbiological contaminants are available from the Safe Drinking Water Hotline at 800.426.4791.

We are required to report only those contaminants which have been detected during the calendar year 2019, or in the most recent sample taken for parameters measured less frequently than once per year. The information must include the contaminant name, the MCLG and MCL, the highest level found (or the average for substances subject to secondary MCL's) and the range of measurements if multiple samples were taken, the date samples were taken, and the typical source or sources of the contaminants detected. Since no MCL's were exceeded, no health effects language is required.

All sources of drinking water are subject to potential contamination by substances that are naturally occurring or man made. These substances can be microbes, inorganic or organic chemicals and radioactive substances. All drinking water, including bottled water, may reasonably be expected to contain at least small amounts of some contaminants. The presence of contaminants does not necessarily indicate that the water poses a health risk. More information about contaminants and potential health effects can be obtained by calling the Environmental Protection Agency's Safe Drinking Water Hotline at 1.800.426.4791.

If present, elevated levels of lead can cause serious health problems, especially for pregnant women and young children. Lead in drinking water is primarily from materials and components associated with service lines and home plumbing. Liberty Chesnee Fingerville Water District is responsible for providing high quality drinking water, but cannot control the variety of materials used in plumbing components. When your water has been sitting for several hours, you can minimize the potential for lead exposure by flushing your tap for 30 seconds to 2 minutes before using water for drinking or cooking. If you are concerned about lead in your water, you may wish to have your water tested. Information on lead in drinking water, testing methods, and steps you can take to minimize exposure is available from the Safe Drinking Water Hotline or at www.epa.gov.

MCL's are set at very stringent levels. To understand the possible health effects described for many regulated constituents, a person would have to drink 2 liters of water every day for a lifetime at the MCL level to have a one-in-a-million chance of having the described health effect.


Conventional water treatment is used at both the R.B. Simms and Whitlock treatment plants. "Raw"water from the reservoir is first passed through a screen to remove large objects, and then treated with chlorine. The chlorine aids in removal of iron and manganese, two natural substances in the water which would stain clothing and plumbing fixtures if not removed. The chlorine also acts as a disinfectant, destroying bacteria, viruses, algae, and other organisms, some of which could cause illness. Alum, lime, and polymer are then added. In a process called coagulation, these substances combine with each other and with fine particles in the water to form a substance called "floc" which is heavier than water. Powdered activated carbon is added at this stage as needed to help remove unpleasant tastes or odors. The water then passes through large basins where the floc settles to the bottom and is removed, taking unwanted substances with it. Clear "settled" water is skimmed from the top of the basins and filtered to remove still more unwanted material. Additional chlorine disinfectant and lime are added as needed to meet state requirements. A corrosion inhibitor containing zinc and phosphate is added to preserve distribution piping and prevent lead and copper contamination. Finally, fluoride is added to prevent tooth decay.

Each step of the treatment process represents a barrier which prevents chemical contaminants and disease organisms from passing through the treatment plant into the drinking water. EPA has established standards for the performance of each of these barriers.

The effectiveness of coagulation, sedimentation and filtration in removing particles from the water is determined by measuring the turbidity of the water as it leaves the filters. Turbidity is a measure of the quantity of finely divided particles suspended in the water, and is reported in units called NTU. The EPA standard for the turbidity of filtered water states that turbidity may not exceed 0.3 NTU in more than 5% of all the measurements taken, and must never exceed 1 NTU. 1 NTU turbidity cannot be seen by the human eye.

Turbidity measurement is required every 4 hours. SWS was in full compliance with this requirement in 2019.